I know that it has been a long time since I posted last time… I have been lazy.. sorry.

But I still believe that it would be better than doing nothing… wouldn’t it??

So, I am  going to post some images which I took while I was doing some experimental practice.

Since last year I have been working with some sea shells and driftwood to express my ideas.

Here I attach my artist statement which explains why I use those materials.

Through the river’s current never fails, the water passing, moment by moment, is never the same. … In this world, people and their dwelling places are like that, always changing.

Dwellings which have been taken from several beaches are about to be owned by someone now.  A new owner or a wearer shall be the part of this mutable world.

I also used the idea of Kintsugi technique which was created as a way of repairing ceramics in the late 15th C, Japan.  By reason of using metal powder and Urushi lacquer, the technique means not only a way of fixing pottery but also creating a new design which gives an object a new life.

Shells which I collected from several beaches 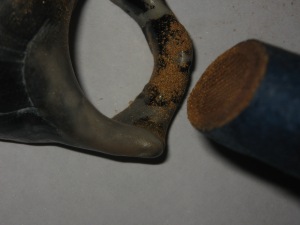 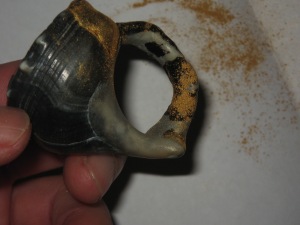 A shell covered by Urushi and tin powder 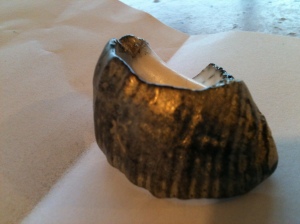 A shell wrapped in a silver plate